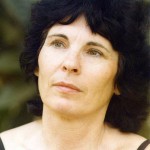 Zahara Rubin was born in Kibbutz Bet-Zera, Israel, where she lives and has been creating her works for over four decades.

She graduated the Plastic Arts Academy of Bat-Yam in 1969 and took part in workshops of various techniques, in Israel and Italy.

Zahara uses a wide variety of formative art methods to express herself, mainly with bronze sculptures, but also with wood and marble sculptures. She also uses “Soft Painting” technique to create wool tapestries and she draws black on white and color images paintings on natural white plywood boards.

Her works were presented in numerous solo and group exhibitions in Israel, United States and Europe (see partial list below). She has received several awards for her work and is a member of he Israeli Painters & Sculptors Union and the Kibbutzim Artists Association.

The observer can find in her works love, happiness, attraction and softness, as well as support, pain, remoteness and yearning. In particular, one can find in her works family relationships, motherhood love and intimacy – all represent her personality and life course as a loving mother and spouse.

Zahara Rubin is happily marries to Danni. They have four children and nine grand children.